Adding a heat shield to a turbo is a very effective way to reduce under hood temperatures and increase the efficiency of the intercooler. However, heat shields are metal and absorb heat, which will eventually cause heat to effect surrounding components.

We at GrimmSpeed decided to increase the efficiency of our heat shields even further by offering an optional, pre-cut, fiberglass-backed self-adhesive gold foil. The DEI Reflect-a-Gold™ Foil is an amazing way to take your heat shield's effectiveness to the next level and prevent it from directly absorbing radiant heat and passing it on to the surroundings. By simply applying the CNC pre-cut foil to the INSIDE of the shield, you are now creating an additional barrier for radiant heat coming from the turbo and reducing under hood temperatures even more.

The gold foil was precisely pre-designed in CAD to fit with our Version 2 Heat Shield, and then CNC cut on a plotter for perfect fit and easy install.

To test the effectiveness of the addition of The DEI Reflect-A-GOLD™ on the GrimmSpeed Version 2 Heat Shield in reducing temperature on the surface of the intercooler near the turbo, a test vehicle was driven in a predetermined loop and measured in the same location for each configuration. The drive loop consisted of 6 miles of low speed driving, followed by 10 miles of highway driving. The vehicle was then returned to the shop, where a FLIR C2 Thermal Imaging Camera was used to measure the temperature of the surface on the side of a GrimmSpeed STI TMIC. The measured location used was just above the passenger side bracket (for consistency) and is of interest due to its proximity to the turbocharger. All of the testing was performed on the same day, driving the same path with the same amount of WOT, in 20 degree F ambient temperature. The temperature measurement for each heat shield configuration is as follows: 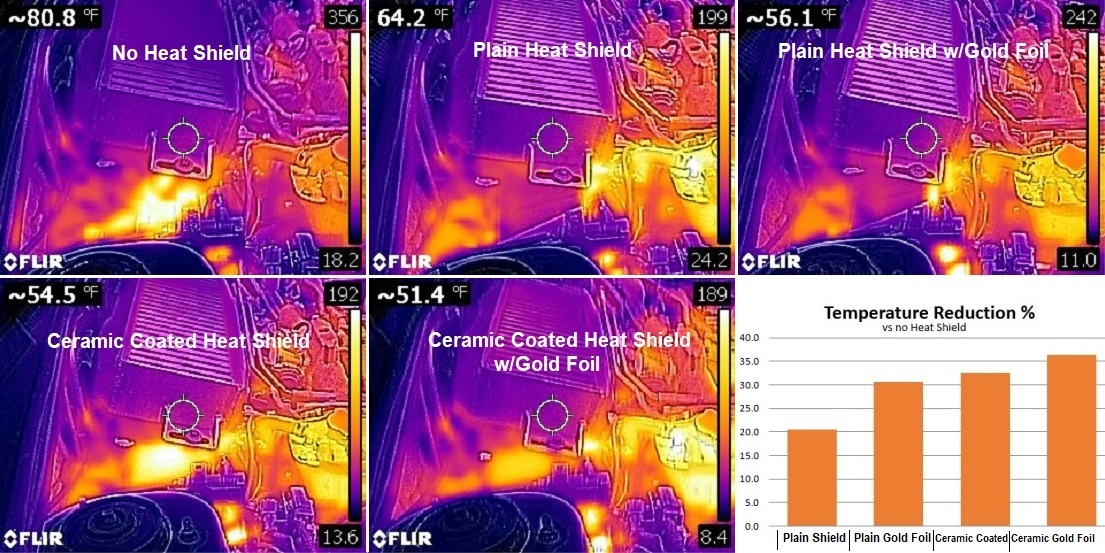 As you can see, The GrimmSpeed V2 Turbo Heat Shield alone offers an impressive improvement of over 20% heat reduction as measured at the surface of the TMIC when compared to an exposed turbocharger. The addition of The Reflect-A-GOLD™ film increased that improvement an additional 10%. The black ceramic coated heat shield offered an even greater improvement with a heat reduction of over 32% and when coupled with the pre-cut gold foil, the overall heat reduction reaches a staggering 36%!

Note: This DOES NOT come with a Grimmspeed heat shield.

Fits perfectly on the Grimmspeed heatshield. Just take your time lining it up, it can easily stick in the wrong place! Looks great and keeps temps down.

Loading...
View more (2)
Was this helpful?
K
Krystian Reviewed by Krystian, from United States
I recommend this product
Rated 5 out of 5

This is a very simple thing you can put in your heat shield to help prevent some heat from getting to your intercooler.